I’d like to welcome Derek Haycock to my website. I want to thank you Derek for taking the time to answer my questions.

Derek is one of the writers in the book Came as ‘Me’, Left as ‘We’ 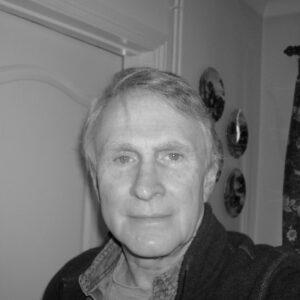 His story in the book is The End-of-the-pier Show.

I’m delighted to be included in your series of author interviews. I hope what I have to say is of interest to your readers and that some of it will be helpful to those about to embark on their own writer’s journey.

This story features an elderly English couple (Maureen and Jack) who have been married for fifty-six years. Tension between the two deepens during a two-day break in April at a quiet seaside town on the Suffolk coast.

Jack is noticing everything – such as the colourful beach huts and the sheets of sunlight splaying through ribbed clouds across the North Sea – except, seemingly, Maureen’s unhappiness. He mentions the subject of money and this further upsets Maureen. She had wanted to go to Florida, but in truth her sadness would not have been eased by a more exotic setting.

Maureen can’t understand why Jack wants them to walk to the end of the pier. Reluctantly, despite the strong breeze, she agrees. More happens there than she could have imagined.

The setting was inspired by a quaint seaside town, one that is a few miles from where I live. There is something special about the pier there – I won’t elucidate to avoid spoiling the story for those who wish to read it – that triggered the idea for the story. The image of an elderly man trying to convince his protesting wife to accompany him to the end of the pier came to me, and I scribbled down a few lines of dialogue for the scene with Jack and Maureen arguing near the entrance.

The details of the ending changed a little as the backstories of the characters developed.

A third-person narrative viewpoint, one without explicitly “voicing” the inner terrain of the characters was something I wanted to attempt. I also recall that I had then recently read Annie Proulx’s novel The Shipping News and been enthused by her accomplished usage of descriptive language.

I already have a sense of how a short story begins and ends before I start to write. In my first draft I pay more attention to character development, viewpoint and narrative tone than I do to structure, so I don’t usually create an initial outline. During the rewrites, as well as reworking the prose, I move passages around and decide whether further backstory or additional scenes are required.

(For the novels I write under the pen name Edward L. Lanner, I finalise the scene order using PowerPoint slides. However, this is something I do only after I have drafted at least a third of the novel.)

In the case of this short story, the character names came to me quickly, although my notebook shows that I scribbled over the name “Linda” and replaced it with “Maureen”. The latter has a slightly more age-appropriate feeling to it, I think.

More generally, it is the names of minor characters that I wrestle with – particularly where these names have foreign origins.

Often I glance at the diverse range of books next to my writing desk and find a potential character name. For example, the names of authors of obscure science textbooks have sometimes come in handy. One doesn’t want to be too “on the nose”, I feel, in choosing names. On the other hand I try to avoid a name that seems an unlikely fit for a character. Sometimes I look up names (particularly surnames) that have a marked regional association so as to accord with the part of the country from where a character’s family originated.

I’m curious about writer’s processes when they write. Often, I handwrite my stories, for the first draft. And I also need to have a cup of green tea nearby.

I compose all my drafts on a laptop, usually in the same room but the location can vary if I want to break my routine. My technique involves rewriting as I write; this would be much more difficult if I were to create any of the drafts by hand.

Sometimes I have background music on with the aim of achieving an atmosphere reflective of the piece on which I’m working.

In notebooks I capture the seeds of ideas for new scenes; snatches of compelling overheard dialogue; plot and character-related issues; and topics requiring research.